You are here: Home


The hatchery, which specializes in the rearing of lake trout, is under the direction of the U.S. Department of the Interior's Fish & Wildlife Service. It is located in Antrim County in the northern portion of the lower peninsula of Michigan. The facilitity is comprised of 116 acres which was purchased from the State of Michigan for $1 for fish culture. The hatchery was

Water is supplied to the hatchery by two springs, named Five Tile and Six Tile, that produce approximately 5,000 gallons per minute. The entire production of this hatchery is dedicated to stocking lake trout into the Great Lakes, primarily Lakes Michigan and Huron. The long term goal is to establish a self-sustaining lake trout population.

transfers up to 900,000 fingerling lake trout to the Pendills Creek National Fish Hatchery in Brimley, Michigan. Typically, 1.2 million fish are released into Lake Michigan and 900,000 in Lake Huron by the Motor Vessel Togue.


The hatchery is located in the beautiful Jordan River Valley and is a popular stopping point during fall color season and snowmobiling. Hatchery is open to the public seven days a week. Staff is on duty daily at 7:00 a.m.  Access to the hatchery is from US 131 at Turner Road, and also from Jordan River Road. 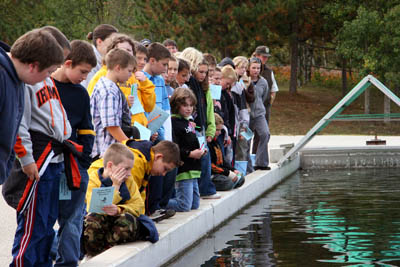 The Fish Hatchery hosts numerous groups, including the public schools. Students arrive at the hatchery for tours and educational programs.

For further information or to schedule a tour, please contact the hatchery at 231-584-2461.