You are here: Home

The Township of Mancelona was organized and approved by an Act of the Legislature on January 18, 1871. Mancelona Township encompasses a portion of Otsego County known as Lakes of the North, as well as a large portion of Antrim County. 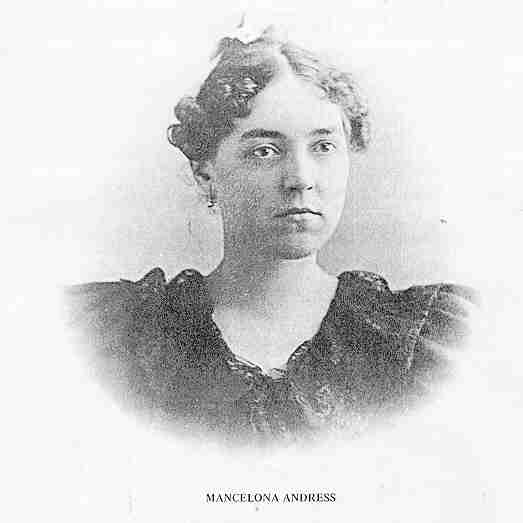 The first election was held in April, 1871 at the home of Mr. Perry Andress, one of Mancelona's first settlers. The Township was named after Mr. Perry's daughter, Mancelona Andress, shown at left.

It was in 1869, four years after the Civil War when Perry Andress homesteaded in Mancelona that was named after his young daughter.

In 1871 the Township was authorized by the Legislature in Antrim County. People came first primarily to farm.  In 1872 the Grand Rapids and Indiana Railroad arrived opening up the Village to southern and northern trade centers. In 1882,  John Otis built a blast furnace to make pig iron using charcoal from the maple trees so abundant in the area. By 1900 Mancelona-Antrim was the largest villages in the county due mainly to the Antrim Iron Company, an outgrowth of Otis's first endeavors. Many Swedish people immigrated to the village as well as people from Indiana and Kentucky to work in the woods and iron plants. Antrim Iron was the main support for the Village until 1945 when it closed down due to the scarcity of hardwood and newer iron making technology but in its day, it was "tops". The farmers gradually concentrated on growing potatoes, which is now the major crop in the area. After some low years the village revived with the coming of stamping plants lilke well known Dura, and three saw mills mostly handling hardwood. It was always known for its fishing and hunting and vigilante spirit.

In the sixties, The Lakes of the North Recreation Community began east of Mancelona and the ski resort Schuss Mountain began to the west. With the growth of the recreation areas in the western half of the county [Torch Lake and Shanty Creek], East Jordan and Charlevoix to the northwest, Petoskey north, Gaylord and Interstate 75 to the northeast and east, and Traverse City to the southwest; Mancelona has become a crossroads community. US 131 carries traffic north on Highway M-66 to Charlevoix, Petoskey, Boyne City and Gaylord via Alba.  Each day State C-38 brings more traffic from Interstate 75 at the Waters exit from the southeast and central Michigan. County Road 571 takes one south to Twin and Starvation Lakes or to Grayling on M-72 and the famous Manistee and Au Sable trout streams. Directly west runs Highway M-88 to Bellaire, the Chain of Lakes and Alden and Traverse City. US 131 to the south brings and takes travelers to Kalkaska, and Traverse City areas.

Ernest Hemmingway wrote stories of Mancelona. The Mancelona Community celebrates a White Pine Stampede ski race annually the first Saturday of February, and a Bass Festival in June.  The area thrives in winter with snowmobilers and skiers. In spring, morel mushrooms surface, and mushroom hunters from all over Michigan head to the woods to find the delicate fungus. In summer, nearby lakes such as Torch Lake are populated with boats, swimmers, water skiers, jet skis and fishermen.  A much smaller lake, Wetzel Lake, is located just north of Mancelona, east of US 131 on Wetzel Lake Road. Wetzel Lake is a popular swimming location for locals.

In the fall, the colors on the trees become magnificent. It is then that area overlooks, such as Deadman's Hill, Landslide Creek and the Jordan River National Fish Hatchery and Jordan Valley, see a great number of visitors. The brilliant colors provide perfect photography opportunities for the nature lover.

Mancelona Public Schools is "Home of the Ironmen."

The Historical Society has several books for sale, including:

and others. Please inquire at the Historical Society.